The new federal states joined the Federal Republic of Germany on October 3, 1990 (day of reunification).

How many states in Germany are there?

Each state has a state capital. In the following I would like to briefly introduce you to a few provincial capitals.

The provincial capital of Berlin is Berlin 😉

Berlin is not only the capital of Germany, but also of itself.

Berlin is a so-called Stadtstaat (city-state), just like Hamburg and Bremen. City-states are states that consist of only one city (except Bremen = two cities).

In the photo you can see the Glaskuppel des Reichstagsgebäudes (glass dome of the Reichstag building). In this building is the German Bundestag. 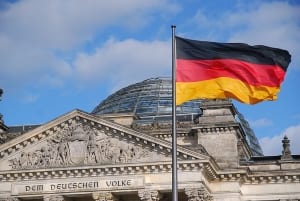 The capital of Bavaria is München (Munich)

In Bayern (Bavaria) there are beautiful landscapes and mountains to admire. Munich is a great city and has many places to go. However, if you are in Bavaria you should definitely consider visiting the famous Märchenschloss in Neuschwarnstein (fairytale castle in Neuschwarnstein). The castle is visited by about 1.5 million tourists every year. So, if you’re around, make sure to visit this castle.

The capital of Hessen is Wiesbaden

Wiesbaden offers a lot for tourists. There are many cultural events in the field of theater and music. On the picture below you can see the Kurhaus Wiesbaden. There are always big concerts, galas and events.

The capital of Rhineland-Palatinate (Rheinland-Pfalz) is Mainz

The Mainzer Rheinufer and the city center are most beautiful in the setting sun.

If you are in Mainz at the right time, you should definitely see the carnival in Mainz. The focal point is Schillerplatz with its Carnival Fountain. The highlight is the Rosenmontagsumzug (Rose Monday parade). On the picture below you can see the Gutenberg Museum.

The capital of Saxony is Dresden

Dresden is definitely worth a visit. The old town is beautifully renovated and many attractions can be reached on foot, as they are all pretty close to each other. If you are in Dresden, you should definitely visit the Frauenkirche, the Zwinger and the Semperoper.

In the picture below you can see the Elbufer at night.

There are of course many more great places in the different states of Germany and I cannot list them all. So, if you are planing a trip through Germany, you should think carefully about which places you want to visit and how much time you want to spend there.

Here you can read this article in German: Bundesländer Deutschland

These TPRS Audio Lessons and Stories combined with the powerful Question and Answer Technique will help you to speak German fluently.

Download a German audio story and learn with the storytelling method.

You will also learn the 7 rules to master German.

Home:
Similarities between German and English

Sign up for my free email course:
Free German Course

Sign up for my free email course:
Free German Course

My subscribers get access to many more lessons step by step. You can register here if you want:
Free German Course

Nice things you could say to your sweetheart
Romantic German Phrases

WordPress Plugin Entwicklung von BST Systemtechnik
In order to optimize our website for you and to be able to continuously improve it, we use cookies. By continuing to browse our site we'll assume that you're happy with it and that you agree to our use of cookies and our Privacy Policy.
more information